To the Campus Community: 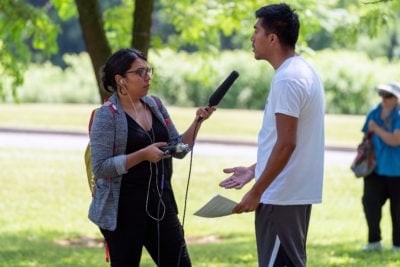 The WWU Scholars Week Organizing Committee is pleased to announce that Adriana Gallardo will be the keynote speaker for the 2020 WWU Scholars Week (May 11-15).  Gallardo, in photo at right, is an engagement reporter for ProPublica. Last year, she helped write the “Lost Mothers” series, illuminating a national disgrace: The U.S. has the worst rate of maternal deaths in the developed world, and up to 60 percent of those deaths are preventable. This series won the 2018 Goldsmith Prize for investigative reporting, received a George Polk Award, a Peabody and was a Pulitzer Prize finalist for explanatory reporting. She also regularly covers issues around immigration and the U.S. Border, including the treatment of children in detention shelters,and recently wrote a series of articles about the long history of sexual violence against the native peoples of Alaska.

The committee is especially pleased to have been able to secure her as a speaker. Watch your email and Western Today for more announcements about Scholars Week 2020. Questions can be directed to the Scholars Week Committee at scholars.week@wwu.edu.